NOTE: A special thank you to NHTSA for supplying this article as a free-use promotion of safe driving around the Thanksgiving holiday. 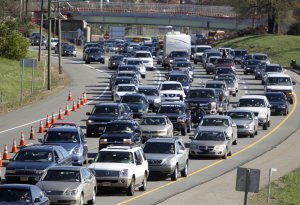 “Thanksgiving is one of the great American holidays that involves a lot of travel. Family and friends from across the country or just across town take to the roads to visit together and celebrate, making it one of the busiest travel times of the year.

But the excitement and hustle and bustle of the holiday can be major distractions for those on the road, and all too often those distractions have deadly consequences.

That’s why it’s important to do the single most effective thing to save your life in the event of a traffic crash: wear a seat belt.

This Thanksgiving, SafetyFirst, highway safety advocates, insurers, and law enforcement officers across the country are spreading the message and  reminding travelers to always wear their seat belts with the Buckle Up America – Every Trip, Every Time campaign.

According to the U.S. Department of Transportation’s National Highway Traffic Safety Administration (NHTSA), seat belts saved almost 12,000 lives nationwide in 2011. In fact, research shows that with proper seat belt use, the risk of fatal injury to front seat passengers is reduced by 45 percent, and the risk of moderate to serious injury is reduced by 50 percent.

Since such a simple step can be the difference between life and death, one would think everyone would always wear their seat belts while in a car. Yet that is not the case. Too many people still don’t use these lifesavers, and unfortunately, deaths which could have been prevented keep occurring every day.

These deaths are unnecessary and preventable. Be careful on the roads and don’t let this Thanksgiving end in tragedy. Insist on proper seat belt use by everyone you travel with.

Remember: Buckle Up America – Every Trip, Every Time.

You’ll be thankful you did.

1 thought on “This Thanksgiving, Be Thankful for Your Seat Belt”